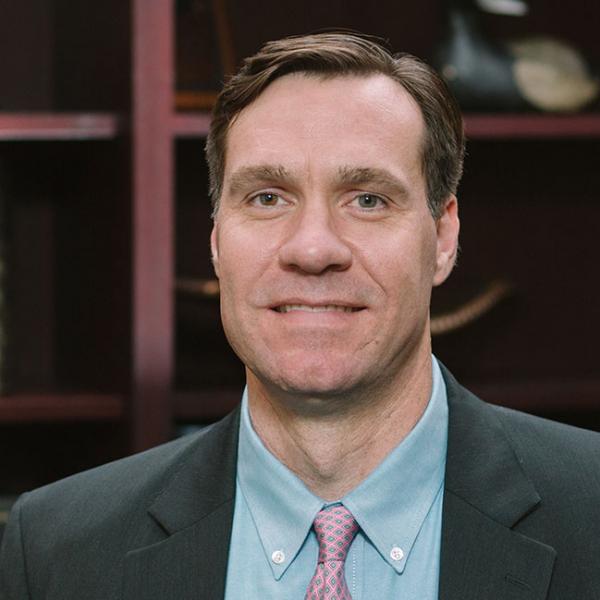 US equities endured a variety of issues over the past fiscal year but produced strong gains overall nonetheless. Following a sharp correction and recovery in the fourth quarter of 2018, stocks weathered intermittent trade war rhetoric volatility, a vilification of the healthcare industry, and international market instability (including the Brexit debacle) to defy cautious expectations and deliver double digit returns. This was achieved with a little help from the Federal Reserve. Remaining focused on the long-term, rather than being reactive to temporary volatility, has benefited our investors.

During the past fiscal year, the Federal Reserve shifted course from raising rates for the purpose of re-arming its monetary toolkit, to cutting rates to counter the uncertainty the trade war with China was having on the US economy. Despite record low unemployment levels, an absence of inflation, and all-time high equity prices, the Fed acted to support the economy and, in doing so, confirmed that it views the trade war as a significant economic risk.

For much of the past year, reported progress toward a new trade agreement with China, or the lack thereof, drove the short-term oscillations of the stock market. News of escalating tariffs inevitably led to equity market weakness while reports of progress towards a deal, or even additional talks, rallied the market. Outside of this volatility, anecdotal evidence has arisen that the trade war has led to capital investment paralysis. Given the importance of business confidence and capital expenditure, the Fed felt it necessary to provide support through the use of monetary policy. Lowering interest rates has the incremental benefit of reducing mortgage rates, as well as stimulating the housing market and new home sales.

In addition to the tax that tariffs impose on consumers, the more dangerous impact of the trade war would be a revamping of the financial benefits of globalization. A significant portion of the global economy depends on access to low-cost labor, billions of new consumers, raw materials, and a smooth global supply chain. Some adjustments to the trade modus operandi are needed but strict limitations which might restrict access to consumers, depress international trading of various goods, or interrupt the global supply chain would be highly detrimental to the global economy. This remains an important issue to monitor.

In 2019, a narrowing of leadership occurred as stocks rose to record levels. When economic prospects narrow, this tends to benefit growth companies, as investors seek out those rare businesses that can grow earnings despite tougher conditions. Strength developed in traditionally more defensive industries as uncertainty over the trade war persisted. The top two performing sectors in the S&P 500 during the fiscal year were Real Estate and Utilities. Semiconductor companies also performed very well, climbing the wall of worry over their exposure to manufacturing operations in China and posting impressive returns.

One traditionally defensive area that struggled in 2019 was healthcare stocks. Midyear the industry was overshadowed by increasing regulatory scrutiny from Washington due to its pricing practices and transparency. The role the industry played in enabling the opioid epidemic also took center stage in March and has yet to be decided. Coverage of “Medicare-for-all” heading into the 2020 political cycle added shade on the industry. For long-term investors, however, these concerns likely create a solid entry point. Previous attempts to restructure the healthcare industry, such as HillaryCare or ObamaCare, were attractive buying opportunities.

Heading into the fiscal year end, the resolution of Brexit dominated the European equity markets. Despite its conclusion still being uncertain, it does appear that the worst case scenario of a no-deal Brexit has been minimized. After over three years of uncertainty, upcoming U.K. elections in December 2019 and yet another Brexit deadline in early 2020 will hopefully put the issue behind Britain and the EU.

Looking into 2020, the stock market actually does a good job in the long-term at overlooking rhetoric and focusing on the underlying economy. Progress towards establishing a healthier trade relationship with China would be beneficial for stock prices and valuation multiples. The upcoming Presidential election cycle could add short-term volatility, but again, the market understands that sweeping changes to major industries are a lot easier said than done. Whether the next year will see a recession still isn’t clear. The bond market flashed its recession warning when the yield curve inverted in early 2019, then again in August. That being said, the fact that the economy will at some point experience a recession isn’t a surprise.

Stocks have enjoyed a very long and fruitful bull market following the sub-prime crisis of 2008/2009. And while this seems like an unusually long bull market run, there have been several 20% corrections along the way and the excesses that occur towards the end of bull markets have yet to develop. Indeed, the fact that the economic expansion has actually been one of the slowest economic recoveries has helped extend the life of this bull cycle. Put simply, low and slow created a healthy and stable market cycle.

Thank you for your investment in the Oak Associates Funds.


The statements and opinions expressed are those of the author and do not represent the opinions of Oak Associates or Ultimus Fund Distributors, LLC. All information is historical and not indicative of future results and is subject to change. Reader should not assume that an investment in the securities mentioned was profitable or would be profitable in the future. This information is not a recommendation to buy or sell.

To determine if this Fund is an appropriate investment for you, carefully consider the Fund's investment objectives, risk factors and charges and expenses before investing. This and other information can be found in the Fund's Prospectus which may be obtained by calling 1-888-462-5386 or visiting our website at www.oakfunds.com. Please read it carefully before investing.

Total Expense Ratios as of most recent prospectus:

*Net Expense Ratios reflect applicable fee waivers and expense reimbursements contractual for a period of one year from the Prospectus dated 02/28/2019. 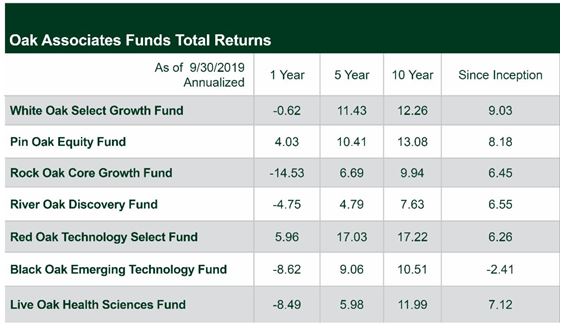 The Adviser has contractually agreed for a period of one year from the most recent prospectus to waive all or a portion of its fee for the Funds (and to reimburse expenses to the extent necessary) in order to limit Fund total operating expenses. This contractual fee waiver may only be terminated by the Board of Trustees.

One cannot invest directly in an index.

To determine if this Fund is an appropriate investment for you, carefully consider the Fund's investment objectives, risk factors and charges and expenses before investing. This and other information can be found in the Fund's prospectus which may be obtained by calling 1-888-462-5386.